A Lifetime in Martial Arts

In 1973, millions of Americans--inspired by Bruce Lee and the Kung Fu TV show--crowded into martial arts schools and took lessons. For most of those people, it was a fad that quickly faded when they realized it required real work and physical effort. For others--like Ken--martial arts became a way of life.

Today, Sifu Ken Gullette (sifu means "teacher") has students all over the world, studying with him through his online internal arts school.

Thousands more have studied his DVDs, which have been highly praised as some of the best instructional DVDs on Tai Chi, Hsing-I and Bagua available.

Ken is known for going beneath the surface, teaching internal body mechanics in an easy-to-understand way, and he has fun while he teaches, always quick to crack a joke or make a bad pun. He uses a science and evidence-based approach, rejecting much of the "woo woo" mystical mumbo jumbo that many internal arts teachers embrace. Ken believes the internal arts should be based on reality, not fantasy and "ancient," out-dated, bogus science.

Internal Martial Arts are Based on Body Mechanics

"Real martial arts require physical force," Ken says. "The internal arts move differently, using different body mechanics that allow you to remain more relaxed and balanced. That is why I love these arts."

The goal of the internal arts is to remain centered and balanced -- both mentally and physically -- while you cause your opponent to go off-balance and then take advantage of his vulnerability.

"The internal arts are much more difficult than just blocking and punching," Ken says. "It takes longer to master these arts, but it is a fascinating journey. The deeper you go, the deeper they get."

His first teacher was Sin The in Lexington, KY. Ken earned a brown belt in the Shaolin-Do

system. He also studied Taekwondo for a while with Roy Crawford and Randy Chambliss in Lexington. In 1982, Ken moved to Cincinnati, where he studied Tien Shan Pai Kung Fu with Karen Vaughn, who was nationally ranked on the tournament scene. The photo at right shows Ken after winning first place sparring at a tournament in Cincinnati in 1983 as a student of Vaughn. Ken was 30 years old and wearing the wushu uniform of Karen Vaughn's Tien Shan Pai school.

Discovered the Internal Arts in 1987

In 1987, Ken moved to Omaha, where he found Sifu Phillip Starr's Yi Li Chuan system in the yellow pages. Pete taught tai chi, hsing-i and bagua, plus chi kung. Taoist philosophy was woven into the lessons. Ken earned his black sash in Yi Li Chuan in 1997.

Ken studied acupuncture with Pete Starr for two years. Pete was an acupuncturist who practiced on patients at his school.

Despite giving it a chance, Ken decided in the end that acupuncture was not what it was claimed to be by people who earn money from Traditional Chinese Medicine, and that modern, double-blind clinical trials showed that most "ancient Chinese medicine" did not work, and when it did, it was little better than placebo.

Some of the realizations he experienced while studying qigong and acupuncture made him become more convinced that false claims were being made about these arts. Ken decided to take an evidence-based approach, demanding extraordinary evidence for extraordinary claims.

"Many false claims are made about the effectiveness of these old treatments, without any independent clinical trial data to support it," Ken says. "The same is true in martial arts. Claims of Dim Mak and Iron Shirt Chi-Kung and the No-Touch Knockdown -- many false claims are made. And just like in religion, people will believe almost anything and then swear that they saw it, they felt it, and it is true. But it isn't."

Ken began challenging "masters" who claimed to be able to knock people down without touching them. He offered $5,000 through Inside Kung-Fu magazine. He contacted some so-called "masters" directly. They all turned him down.

"Of course they turned me down," Ken says. "They are frauds and they know what they do will only work on people who will play along with the con." 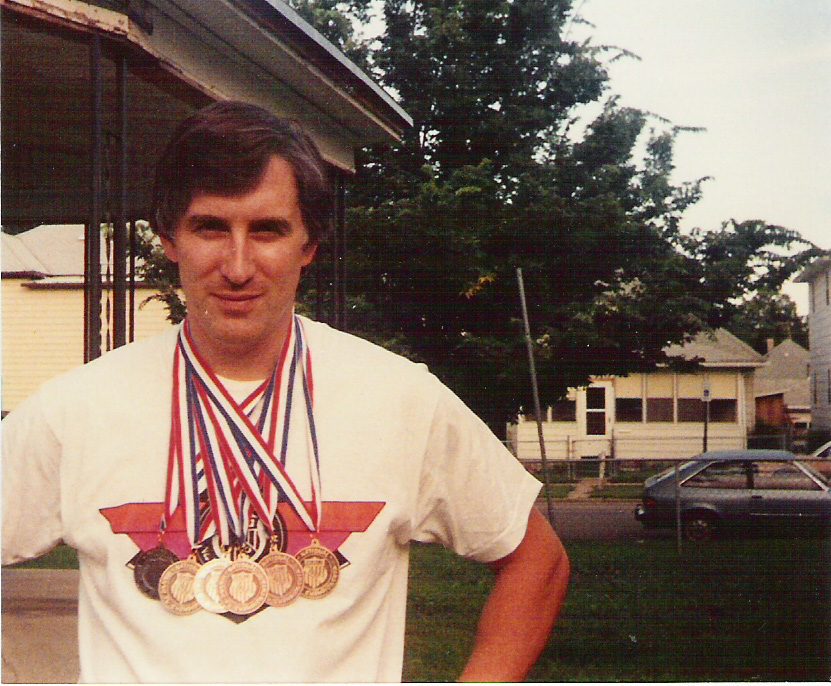 While working in TV in Sioux City, at age 38, Ken decided to enter the "Toughman Contest" that came to town and invited all "tough guys" to enter a full-contact boxing tournament. Knowing that his youth was slipping away, Ken decided to enter. He won his first match against a younger, taller, heavier opponent, and then called it quits, having checked "full contact match" off his bucket list.

In the early 1990s, Ken was the news director at WOI-TV, the ABC affiliate in the Des Moines, Iowa market owned by Iowa State University. Ken practiced in a gym that was used by the Iowa State Boxing Team. Coach Terry Dowd would see Ken practicing, and one day, Coach Dowd invited Ken to workout with the team.

For the next two years, at age 39 and 40, Ken trained with the young guys on the team, running the stairs, doing all the exercises, running on the track, doing the drills and getting into the ring. He gained a great deal of respect for skilled boxers.

After getting his black sash in Yi Li Chuan in 1997, Ken began teaching on October 1st. Among his first students was Rich Coulter, who became Sifu Gullette's first black sash student in 2001. Ken started by teaching the Hsing-I, Yang Tai Chi, Bagua and Qigong he had learned under Sifu Starr.

By teaching, Ken began to discover there were holes in his kung-fu curriculum. He asked questions and joined the Neijia List, a listserve featuring Mike Sigman and other mostly Chen style Taiji practitioners. Ken began hearing terms he was unfamiliar with -- ground path, peng jin and more.

Learned from Chen Xiaowang and Chen Xiaoxing and their Students 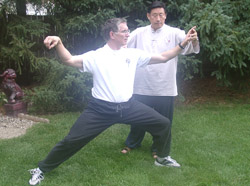 Through Jim and Angela, Ken met and learned from Grandmaster Chen Xiaowang and Master Ren Guangyi, one of Chen Xiaowang's senior students.

In the decade that followed, Ken also became a student of Mark Wasson, a disciple of Chen Xiaowang. During these years he also met and learned from Grandmaster Chen Xiaoxing and Master Chen Bing. In 2006, Ken and Nancy sponsored Chen Xiaoxing's visa to 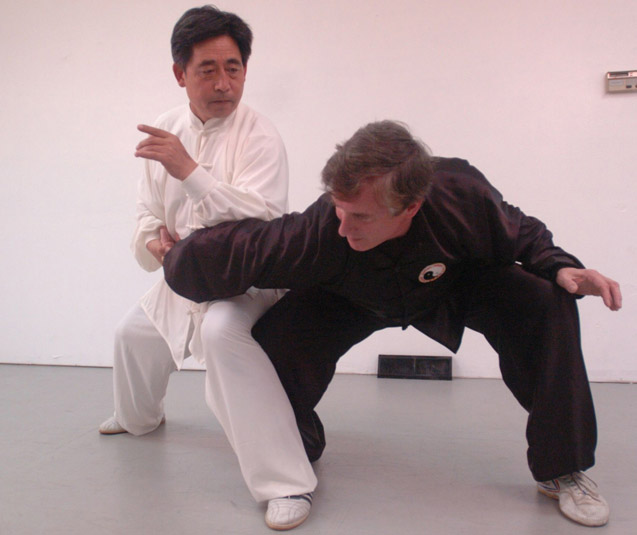 the U.S. The master stayed in their home in Bettendorf, Iowa, for a week.

Ken decided in 2006 to become independent and learn from as many experienced Tai Chi people as he could without being labeled a student of anyone.

In 2005, Ken and Nancy bought their own building and started a kung-fu school, but Ken quickly realized that running a profitable school meant sacrificing some quality aspects of the arts.

They closed the school in 2007 when Ken took a new job as director of media relations at the University of South Florida. A year later he lost the job, and on July 4, 2008, he launched his online school at www.internalfightingarts.com.

"The idea for the online school came from some emails I've received over the years from people living in areas that don't have good internal arts teachers," says Ken. "

"Students" Around the World 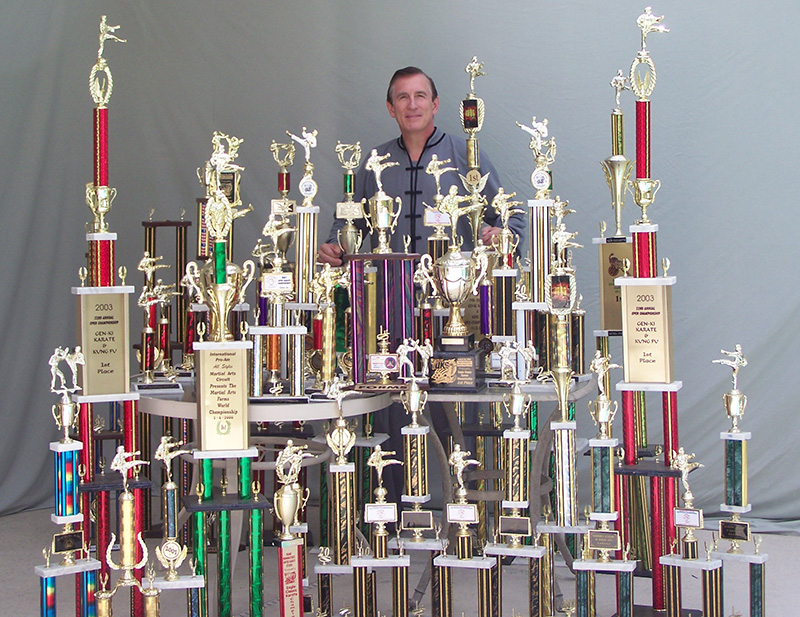 Now, he has members around the world, each paying a small monthly fee to study the video lessons and other material on the website. He creates the videos (Nancy is often the videographer) and adds new lessons almost daily. Members from Japan, the Netherlands, England, Malaysia and other nations call the website "amazing," and say it "exceeds expectations."

The site is not intended for certification -- it's too difficult to do that by distance learning. It is intended to provide information to supplement your training and to provide insights and concepts your teacher may not know, or perhaps hasn't told you yet.

Ken works with a small group of students in the Quad Cities while he improves his skills, developing videos and material for his online school.

In 2006, Taekwondo Times ran a story on Tai Chi, featuring Sifu Gullette and his experience training with Grandmaster Chen Xiaoxing (brother of Grandmaster Chen Xiaowang), who is in charge of all tai chi training in the Chen Village. The focus of the article was to show other martial artists that their perceptions of tai chi are wrong. It is not a "soft" art -- it's a powerful fighting art. 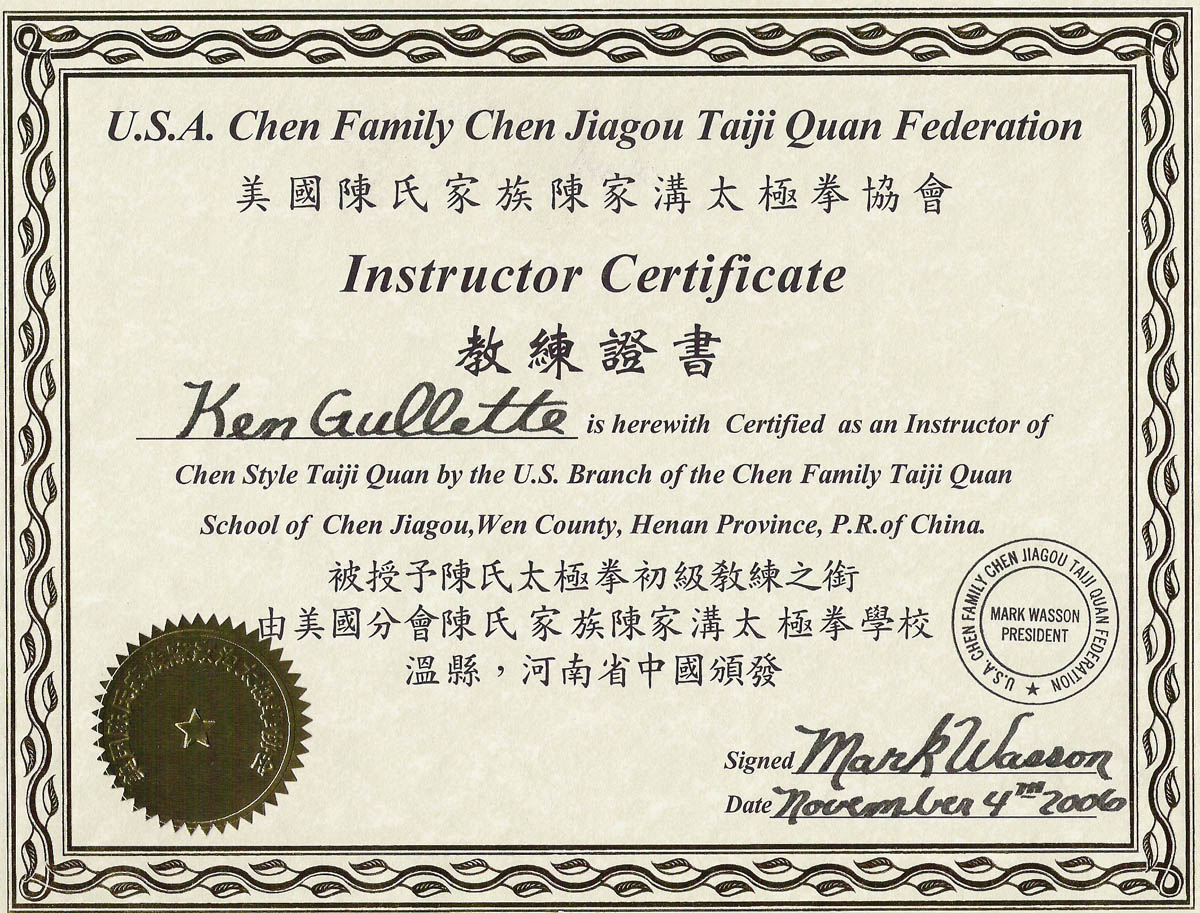 Shortly before he sponsored Chen Xiaoxing in the U.S., Ken was certified as an instructor with the U.S. Chen Family Chen Jiajou Taiji Quan Federation, connected directly to the Chen Village tai chi school through Grandmaster Chen Xiaoxing. A photo of the certificate is at left. Ken was one of the first Americans to be certified through Chen Xiaoxing's school.

The past decade has included some challenges. Ken lost the function of his left lung due to a rare complication from an ablation surgery for atrial fibrillation. While at Cleveland Clinic, doctors tried to stent one of his pulmonary veins, but they accidentally tore the vein and pierced his heart. Ken nearly died (this was in October, 2009) and went from 206 muscular pounds to 156 pounds, losing a lot of muscle mass. Following that, he was living with heart failure for a couple of years. He still teaches and practices, but he is no longer able to spar for long periods, and his breathing gets a little heavy when he is doing movements while explaining them. He still creates videos and ebooks for the website, and he still works hard to improve his own skills.

"You play the cards you are dealt," Ken says. "Doctors are amazed that I survived at all. I'm going to enjoy every moment and continue to improve my own understanding and skill in the internal arts."

Above all, Ken's goal is to pass along what he has learned to others, through the website and DVDs. He holds nothing back. Members of the website get all content, from beginning to advanced, instantly.

Ken Gullette's goal has not changed from the day he took his first kung-fu class on September 20, 1973. He still works to deepen his understanding and skill in the internal arts and pass that knowledge along without the mystical mumbo jumbo that many internal arts teachers embrace.

"Real skill in the internal arts is a lifetime journey," Ken says. "But what a fascinating journey!"

Join Ken and try this website for two weeks free. He runs an honest site. There is absolutely nothing to lose, and a LOT to gain.

Ken lives in Moline, IL with his wife, Nancy

Thanks for signing up!
Close